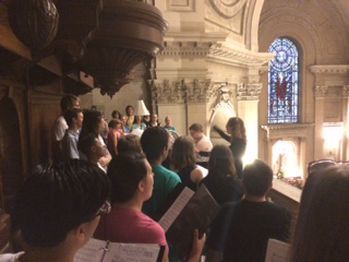 On Saturday (June 13), the University of Notre Dame Children’s Choir will perform at Sunnyside Presbyterian Church in South Bend at 4 p.m. The concert, the start of a national tour, is free and open to the public.

The ecumenical Notre Dame Children’s Choir was founded in 2013 on the belief that children singing sacred music are a powerful force for spiritual renewal, community healing, and cultural change in our churches and concert halls.

The children’s choir is part of Sacred Music at Notre Dame, which offers fully funded master’s and doctoral degrees in choral conducting, voice, and organ. Led by renowned scholars, Sacred Music at Notre Dame seeks to build creative, multigenerational partnerships between academia and communities of worship. Graduate students in the program act as teachers and vocal coaches for the children’s choir and serve in local congregations, preparing to establish or reinvigorate child-centered church music programs as they move forward in their careers.